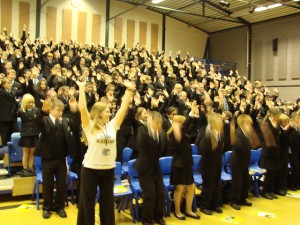 Underfloor heating lies at the heart of Oxfordshire’s first entirely carbon-neutral school building, it was revealed this week.

The Oxford Mail reported on the completion of the £4.4 million sixth form block at Cooper School, in Bicester means that the two-storey building is ready to open in September and receive its first intake of students.

As soon as work began on the block last summer the latest in eco-building technologies were utilised to ensure it was highly energy efficient and underfloor heating was key to this.

When used in conjunction with renewable energy sources such as solar panels, and the best insulation possible, underfloor heating can keep a building toasty with the least effort and expense. The system also works hand in glove with a a high efficiency hot water boiler, ensuring that heat is always available.

The funding for the building was mostly provided by Oxfordshire County Council, apart from a £600,000 government grant, in the form of eco-town funds provided to Cherwell District Council, which helped install the underfloor heating and other energy-efficient measures.