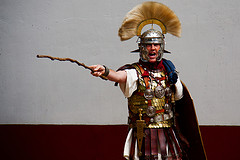 This month saw archaeologists explain to locals about the Roman invention of underfloor heating, at the remains of a fort in Tebay.The remains of the Roman fort at Low Borrowbridge Farm in the Lune Gorge are currently being excavated by the Lunesdale Archaeology Society, and the start of this month saw an open day at the site.

As site director Joseph Jackson even dressed as a Roman centurion to reveal the area’s ancient history, enthusiastic archaeologists revealed coins and ceramics that had been discovered, plus an underfloor heating system which they believed was used to warm the floors of the fort’s bathhouse.

The Romans were the first major civilisation to realise the benefits of underfloor heating, which was powered by a furnace, which allow warm air and smoke to pass through a raised and hollowed-out floor area. The Tebay archaeologists now plan to spend the next few months writing up their discoveries and constructing as accurate a picture of possible of life in Roman times.