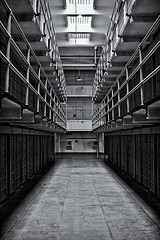 A prison protest in New Zealand at the weekend led to the facility being placed into lockdown after a power outage put pay to their television and underfloor heating. The power cut struck on Saturday at the Otago Corrections Facility in Milburn, and caused a seven-hour “passive protest” in the central yard of the affected accommodation unit in which a handful of the low and medium-security inmates took part. It is believed that a particular issue was that the power cut had turned off the television on the very night that the Rugby World Cup quarter-finals were taking place.

The prison opened in 2007 and drew praise and criticism in equal measure for its state of the art facilities, including underfloor heating and a flat-screen TV for each wing, which led to the jail costing $218 million to build. The prison director said that it was the first protest of its kind at the facility.