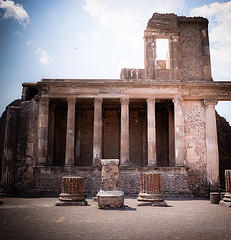 The Musee Maillol in Paris has just opened a startling new exhibition, a full reconstruction of a Roman villa from the doomed city of Pompeii. The reconstruction uses 2,000-year-old artefacts to show exactly how a prosperous Roman family would live in the villa, which includes a full recreation the civilisation’s pioneering underfloor heating system, the hypocaust. This was invented by the Roman merchant and hydraulic engineer Sergius Orata, according to the writings of his contemporary, the architect Vitruvius, although this has never been confirmed.

The hypocaust, which derives from the Ancient Greek hypo meaning “under” and caust-, meaning “burnt” was powered by a basement furnace, which warmed the air and allowed it to pass through a specially-created underfloor space. The Parisian Pompeii A Way of Life exhibition is now open to the public and contains many other weird and wonderful devices such as a Roman hot water boiler. It will remain until February next year.