A boom in British sea power is likely this decade, according to the renewable energy industry body, Renewable UK. The organisation has recently said that it believes the sea-powered renewable energy sector will generate some 15,000 new jobs by 2021, as part of a £ 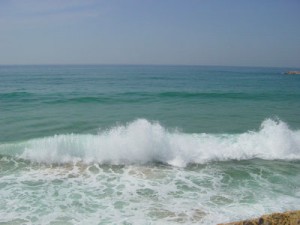 3.7 billion industry. With renewable energy one of the great energy and money-saving partners of underfloor heating, we take a look at five forms that sea-based green energy can take:

Wave power. Perhaps the best known of all forms of renewable energy from the sea, wave power involves harnessing the energy created by the ocean’s surface waves to generate electricity, desalinate water or pump it into reservoirs. The machines used to exploit wave power are known as wave energy converters (WECs), which can be placed on the seashore itself, just off the shore and further out to sea. Once the wave energy has been captured at source, the power generated needs to be transferred to its point of use or connected to the national grid with power lines.

Tidal Power. Quantitatively different from wave power, tidal generation makes use of moving masses of water as a whole. Although the technology is known, this form of renewable energy is not yet in widespread use due to relatively high cost and limited places with sufficiently strong tides, but experts believe it has the potential to be one of the most useful forms of sea-based renewable power, especially now the next generation of technology is coming through.

Marine current power. This form of renewable energy comes from harnessing of the kinetic energy of marine currents that can be found covering large swathes of the oceans, the Gulf Stream that keeps the UK warmer than Siberia is one such current. Marine current power is not widely in use at the moment but has great potential for the future, since marine currents are more reliable and regular than wind and solar energy.

Ocean thermal energy. Known as OTEC for short, this form of renewable energy exploits the difference between the cold water of the deep sea, and the warmer shallows to power a heat engine and produce electricity. Such temperature differentials, which increase the efficiency of a heat engine the greater they are, are at their best in the tropical oceans, with OTEC possessing the potential to offer energy levels up to 100 times greater than forms of energy generation like wave or tidal power. They can also operate continuously and are not dependent on the weather.

Osmotic power. This is the most controversial of all the forms of sea-based renewable energy options. It works due to the difference in salt levels between sea and river water, using osmosis to create energy, according to laboratory tests which are now being converted to practical use in the Netherlands and Norway. However there are serious concerns over the environmental impact of discharging large quantities of brackish fresh water into the sea, and vice versa. Osmotic power may well be renewable, but it sure isn’t green!