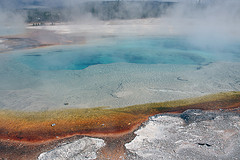 Australian engineers have been pushing for their country to invest more in one of the forms of renewable energy with the most potential: geothermal energy. Geothermal energy as a concept dates from the ancient world, unsurprisingly the Romans made much of it when settling in areas with hot springs. Then, as today, the hot waters were used to heat baths or provide their form of underfloor heating. Nowadays, while geothermal energy is just as hot a concept, it is used to provide more than just hot water, bringing electricity to many areas. A 2005 report found that 73 countries have renewable energy projects which use geothermal, and in total they produce a total of 273 petajoules (PJ) of energy.

Geothermal energy is easy in areas where tectonic plates come together, such as Bath in the UK, where groundwater is of high temperatures. In other areas, heat contained beneath the surface, can be extracted with heat pumps. Geothermal energy projects can provide heat, lighting, hot water and power eco-friendly housing developments with underfloor heating, energy-efficient boiler systems, and other innovative high-tech solutions. Since Australia is increasingly finding itself on the front line of climate change, many engineers Down Under believe geothermal will be a major factor when it comes to helping reduce carbon emissions. Geothermal advisor Troy Thompson, who currently works for German civil engineering company HTTE Bohrtechnik GmbH. “As an Australian living in Germany, I have witnessed first-hand the cost savings, he said, noting that in Australia, sub-surface temperatures can range between 10-24 degrees Celsius at 50-400 metres in depth. I would encourage all designers and builders to seriously look at this technology. “